I could have taken the 30 minute direct flight from Saigon to Quy Nhon but instead, a few friends and I decided to rent a car and explore the coastal landscape of south central Viet Nam.

The eight-hour drive along the famous National Route 1A to Quy Nhon was definitely a long journey. For those of you who are new to this part of the world or Viet Nam, National Route 1A (a two-lane highway) traverses the entire length of the country from Ha Noi in the north and to Ca Mau in the south.

We made several stops at small villages for fuel and food. As one would expect, we passed many inland towns along the narrow road, hectare after hectare of farmland, rice paddies and coastal villages. 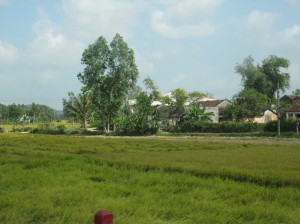 Hectare after hectare of farmland by Philip G

In some places, the road was very narrow and winding. To make matters worse, we found ourselves in a “conga line” of trucks, buses and cars, led by, yes, cattle. It was like a snake weaving its way along the contours of the mountains and through the valleys.

As the road skirted the shoreline, we were in awe of the incredible views of the Pacific Ocean. This brought back many memories. When I was studying in Rome, our class rented a bus to tour the southern cities of Italy. I remembered many beautiful coastal towns, marinas and beach communities clustered along the Italian Amalfi Coast.

There was always a “picture perfect” moment in each town, as it nestled on the shoreline with its deep blue water and beautiful beaches.

The City of Quy Nhon is in the Central Highlands of Viet Nam. It was once a French trading port and later an important American military base. And it is just as beautiful and breathtaking as one would imagine for this part of the Pacific Coast. Quy Nhon, there is no doubt in my mind, is a hideaway treasure waiting to be discovered.

Our SUV had trailed heavily loaded trucks, tourist buses and a few mopeds for hours. We were happy to get off route 1A and finally arrive.

Quy Nhon City on the horizon by Philip G

The approach to Quy Nhon from the south is spectacular; the blue-green water of the Pacific is very refreshing, the calm and undisturbed beach stretches as far as your eye can see, the white-topped waves gently caress the shoreline and the majestic view of Quy Nhon gradually comes into focus on the horizon to welcome us to its hideaway coastal location.

Quy Nhon is geographically very different from my home town – Tat Cau which is located on the southwest coast of the delta region. It is about 190 Km (120 miles) from Ho Chi Minh City to the East. The image I remember when I left Viet Nam as a child was of my village photographed from the boat before the sun set.

Tat Cau is neither a beach town nor a coastal city. It is a village built along the edge of the river near the Gulf of Thailand.

Water ways were the main transportation routes in Tat Cau. Boats were the vessels that transported goods and people throughout the region. Water was everywhere. There were barge/ferries for transportation, boats for living and for fishing and boats for transporting fruit and other food. Every morning those boats gathered on the water’s edge near our town center or at the water taxi stop to sell fresh fruit, fish and vegetables to local merchants.

Back then when I was a child, beach towns like Da Nang, Nha Trang and Vung Tau were far away places where rich people vacationed in extreme luxury – at least to us. Those places were like a dream and only existed on postcards and old pictures that were sent to us from wealthy relatives on their vacation.