It was an early start by any standards. So early, I can recall the time exactly; 4:20am.  Ho Chi Minh City was damp and very dark. But we had to be in Gia Nghia by 9:30am. Nevertheless, five hours to drive 245 kilometers seemed extraordinarily conservative, given that the entire journey would be along the four-lane Route 14.  Within an hour, I knew why the day had started in the middle of the night. It seemed as though the entire route was under construction; a muddy ribbon of red dirt, full of axle-breaking potholes, slow-moving trucks and buses. Sometimes the traffic thinned out enough to get a true sense of how road construction in Vietnam works…Lesson One: Don’t bother with detours, traffic cones or warning signs, just get on with it!

Gia Nghia is the capital of Dak Nong, a relatively new Province in the Central Highlands. The almost imperceptible climb from Ho Chi Minh City is marked by a welcome drop in temperature and humidity as well as a distinct change in the local architecture.

Wood construction replaces brick and stucco and roofs typically include deep overhangs of overlapping galvanized ‘sheds’. And that’s what they do; shed water quickly and away from the main structure of the house.

Sometimes, longer lasting tiled roofs are preferred by those who can afford them.  The mill work on doors and windows is also a distinctive regional feature and quite different from what we were used to seeing in Ho Chi Min City. 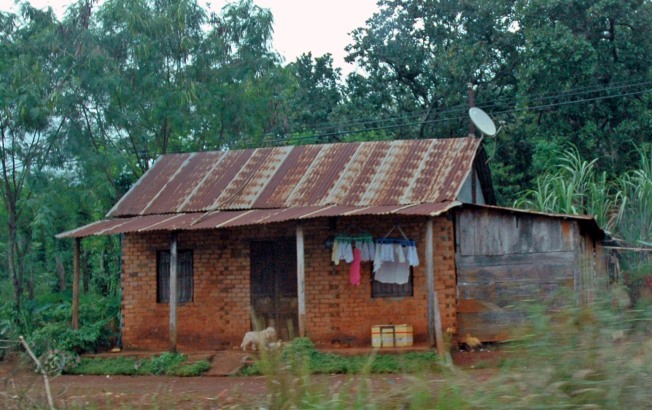 The red clay and rusting roofs are everywhere and leave a lasting impression when framed by the lush green backdrop of rubber trees and cashew nut plantations.

Hard against the highway, a daily market adds to the congestion but also provides a welcome respite from the discomfort of the trip. Unfortunately our schedule dictated that most of my photos had to be taken from a moving car. Sitting in the heart of my blurred image of busy shoppers is a stall-holder and her baskets of fruit. If only we could have stopped!

Highway 14 is an important national route through the Central Highlands, hugging the Cambodian border in places and eventually leaving the mountains and reaching the coast near Hue and Da Nang. Buses, therefore, are commonplace and mostly this size, carrying passengers efficiently (if not a little uncomfortably) between the main cities that punctuate the route.

But the cities on Highway 14 are quite a distance apart, so it would seem that there’s plenty of room for local enterprise – even if that means having to accept that your neighbors might not apply the same standards of window dressing as you!

And some places just seem to be waiting for the new road construction to be completed before carrying out their own face-lifts. We were getting used to seeing the incredible amount of road-side commerce that seems to characterize all of Vietnam’s main highways. Our partner, Phong’s Magical Mystery Tours were, I’m sure, deliberately designed to show us parts of the country most visitors never see. I think the Beatles would have approved…