The term ‘countryside’ conjures a variety of images.  The perfect English village; neat and tidy with its well-kept green, duck pond, ancient church and a pub or two. The French version; narrow streets, quiet to the point of being deserted, especially after sunset. In America, the ‘countryside’ can mean a combination of agri-businesses run by global companies and, much like Britain, weekend cottages for the wealthy urban elite. New ruralism, indeed!

A Champa tower near Quy Nhon: Guarding the surrounding countryside

While I imagined rural life in Viet Nam would differ considerably from these ‘western’ versions, I was surprised by what I found, as a group of us spent a day traveling through the countryside.

At first, everything seemed as one would expect.  Small, intensely cultivated fields, created beautiful vistas that faded into the verdant backdrop of gently sloping hills and mountains. Centuries-old Champa towers and Buddhist temples were eye-catching landmarks. The boundaries of the low-lying farms were defined by irrigation ditches, trees and hedges.  Homes were often several hundred meters from the road and utterly connected to their farmed land.  People were tending the fields and, yes, water buffalo pulled carts and ploughs and other machinery.

Then we entered our first of many villages that day.  The houses here opened directly onto the road or were protected from the traffic by a small front garden or yard.  Often the yard had an important commercial purpose, as storage for manufactured items or as an area to conduct business.  One of my abiding memories was the creative use of the edges of the warming concrete road surface; our vehicle had to slow frequently to avoid the rice drying in the midday sun.

A typical farmhouse, viewed from the main road.

The boundary between home and business became blurred. Western planners and urban designers like to talk about ‘mixed-use zoning’, creating descriptive terms like ‘live-work’ or borrowing foreign expressions like ‘atelier’ to broaden their vocabulary. In Viet Nam, the immediate impression was of an organized chaos of potentially conflicting activities, compounded by the sheer number of people that we passed along the road. Crowded homes doubled as stores or workshops and, with children, came creches while the oldest members of the household seemed to work as hard as the younger generations around them.

Protection from the hazards of the daily ride to work...

Every village we passed through had its share of micro-businesses (as we over-analytic Westerners would say). Potters, weavers, metal workers and mechanics occupied small  workshops along the narrow main streets. Meanwhile, produce of all sorts was farmed in the surrounding fields, although rice seemed to be the predominant crop. Finally, there were the schools and, in some larger villages, local government offices that provided vital employment possibilities and essential services in this communal society.  Manufacturing, agriculture and services coexisted and, crucially, generated a level of energy and activity that I had never seen before in a rural setting.

In the front yard of a village potter

As usual, young people were predominant, cycling and riding motos from school to home and, probably back again as we approached the lunch hour.  The road seemed impossibly narrow and certainly not sufficient for the drying crops, heavily laden pedestrians, kids on bikes, youths on motos, the occasional truck and our obligatory SUV (with six adult passengers, I’m pleased to report).  Amazingly and despite experiencing similar road conditions in every village we passed through, we avoided mishap.

It shouldn’t be surprising to see so much activity in the Vietnamese countryside. Agriculture, though declining in relative economic importance, still occupies 60% of the nation’s employed labor force.  Most tellingly, although 50% of Vietnam’s land mass is considered to support agriculture and forestry, only 9% has the alluvial soil essential for truly productive farming, a fact born out by our drive through the intensely cultivated fields with their backdrop of silent wooded hillsides.

We returned to Quy Nhon during rush hour, having spent the day enjoying our ‘not-so-quiet drive in the country’.  What we had seen in the space of a few hours was a society that appears to be striking a balance between its urban and rural economies. While the cities in Vietnam are magnets attracting increasing numbers of people from the countryside, to Western eyes there appears a vibrant, viable rural economy that, in terms of its energy, is uplifting and culturally fascinating – and a lot more compelling than the European or North American versions. 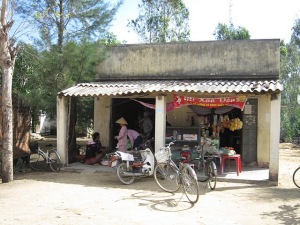 One of the many stores along our route.

One thought on “A Drive in the Country”